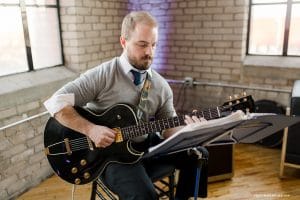 More than anything, Chris Primeau is a student of music.  Though he sang and played saxophone from a young age, he was always drawn to the guitar.  At the age of 13 he purchased a cheap guitar and amplifier with the money he earned as paper boy and never looked back.  Despite originally being enamored by the sound of rock music, Chris nonetheless honed his skills in the Community High School Jazz Band. His interest in music quickly blossomed into a passion, and as his dedication and work ethic grew, he started to win awards for his performances at local competitions.  Clearly music was not a just a hobby, but a calling.

Upon graduation, Chris began studying at Washtenaw Community College where he was mentored by guitar virtuoso, John E. Lawrence.  There he began exploring new material in classical guitar, solo jazz guitar and acoustic blues.  This led Chris to realize he would never be happy playing in any one genre; he had to explore them all.  With this revelation, Chris decided to take his studies to the next level at the world-renowned Berklee College of Music.  Studying under guitar legends such as Tim Miller, Don Lappin, Jon Finn, Norm Zocher, Guy Van Duser and Jon Baboian, he strived for proficiency in every style he could.  Chris also began building his composing chops, writing his own funk/fusion works and forming a quartet for their performance.  A stand-out student, he graduated summa cum laude in 2009 with a degree in music performance.

A Passion For Music Education

A year after graduation, Chris itched for a new challenge.  His desire to grow led him to relocate to the live music capital of the world, Austin, Texas, in October 2009.  Thanks to the city’s creative environment, his teaching clientele exploded while he remained active as performer.  After years of performing live, gigging with The Rocket Brothers Band, doing fill-in work for jazz, country, blues and rock groups and doing solo/duo sets, he realized his true passion was teaching the guitar.  Since 2015, he has put his exclusive effort towards teaching, developing new teaching techniques and curriculum constantly while becoming one of the city’s most sought after independent music teachers.